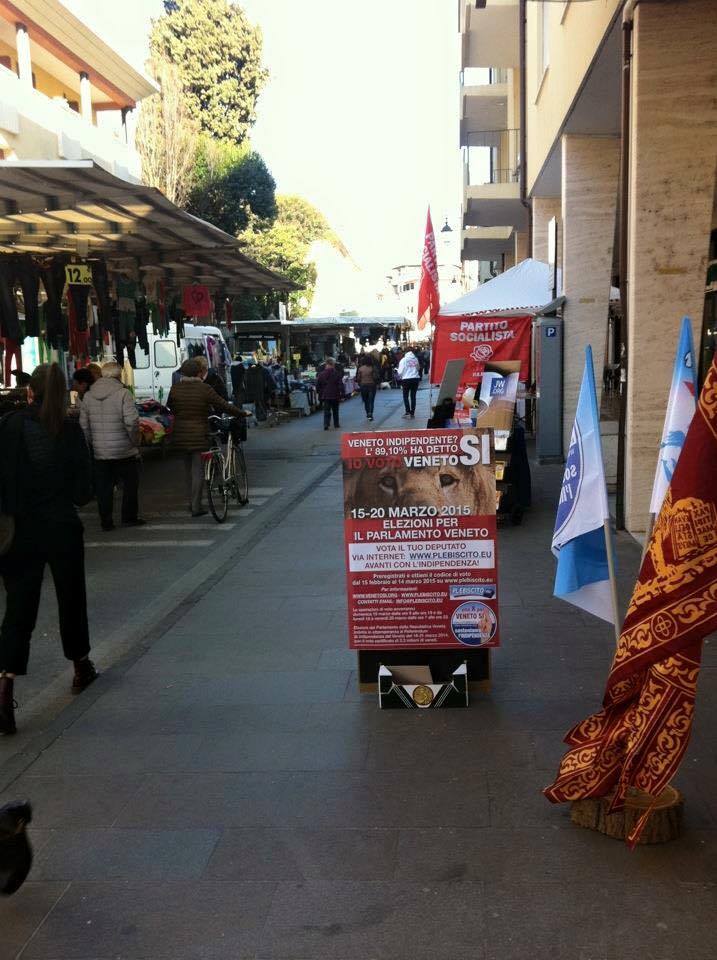 Results will be communicated on next Saturday 21st March in piazza dei Signori in Treviso, on the first anniversary of the Digital Plebiscite and the declaration of independence of Veneto. Gianluca Busato: “Venice and Veneto will become a global hub within 2025”

[Treviso, 13th March 2015] – Right one year after the celebration of the referendum and the declaration of independence of Veneto on 21st March 2014 in Treviso, on next Sunday 15th March the elections for the provisional Parliament of the Venetian Republic will start off; they will last until next Friday 20th March in the evening. The provisional Parliament is an institution born from the process of independence arisen from the plebiscite consensus emerged last year from the digital polls that saw over 2.3 million Venetians participating in the vote, equal to 63.2% of voter turnout, with 89.1% of Yes expressed valid votes, as a result the free and independent Federal Venetian Republic was born.

Self-managed elections of the Venetian Parliament are held in a moment when Italian parties in Veneto are ripped apart as a result of internal polemics that reveal their inability to intercept the will of change of citizens, oppressed by a socio-economic situation that does not reflect the illusory optimism about the condition of the public accounts of the Italian state, as shown by the drop of industrial production of 2.2% in January 2015. The evidence of will of independence is confirmed by the flow of digital self-registrations of Venetian electors: two days before on-line vote starts off, in fact we can see that already 100,000 Venetians have registered themselves to receive their own personal code to vote from www.plebiscito.eu. Plebiscito.eu analysts estimate, by comparing data of registration curves of last year, that final voter turnout will be over one million. The communication campaign underway saw production of a significant digital marketing campaign based on newsletters sent to all registered contacts, social networks advertising and also traditional means, like for instance tv and radio advertisements, bill-posting and delivery of more than one million and a half fliers house-to-house in the whole territory of Veneto.

The election of the Venetian Parliament follows the decision of the Delegation of Ten, composed of the 10 most voted Venetians last year, that being appointed to fulfill the expression of people’s will, deliberated the birth of the legislative body that will be elected next week and of the Provisional Government that will take office and declare oath of allegiance to the Venetian Republic in the same Piazza dei Signori in Treviso that saw witnesses communication media from all over the world, always on Saturday 21st March starting from 7PM, when also elections data will be communicated.
Veneto was divided into 42 territorial areas plus one more area dedicated to Venetians residents abroad. Each election area will elect 2 representatives among those who will receive more votes. Each elector, through the INTERNET site www.plebiscito.eu, after introducing his own personal voting code, will find only and exclusively the lists of representatives candidates in his place of residence and will be enabled to express just one preferential vote for the candidate he wants to elect in the Parliament through a simple click. The Venetian Parliament will be therefore composed of 86 representatives plus the 10 delegates elected last year.

Gianluca Busato, president of Plebiscito.eu commented : “Venetians seem to be keen on e-voting, that permits them to express themselves without public exposure. Digital Revolution we have undertaken represents a new form of political action that changed dramatically the political framework, drawing the world’s attention on the Venetian question. Venice and Veneto are set to become a global hub in a changing world, center of gravity and strategical junction of the new international communication routes, to begin with the new silk roads that will be a reality within 2025 and today must find out interlocutors and representatives able to measure up these challenges to protect at the highest level the interests of the Venetian People in the world”.