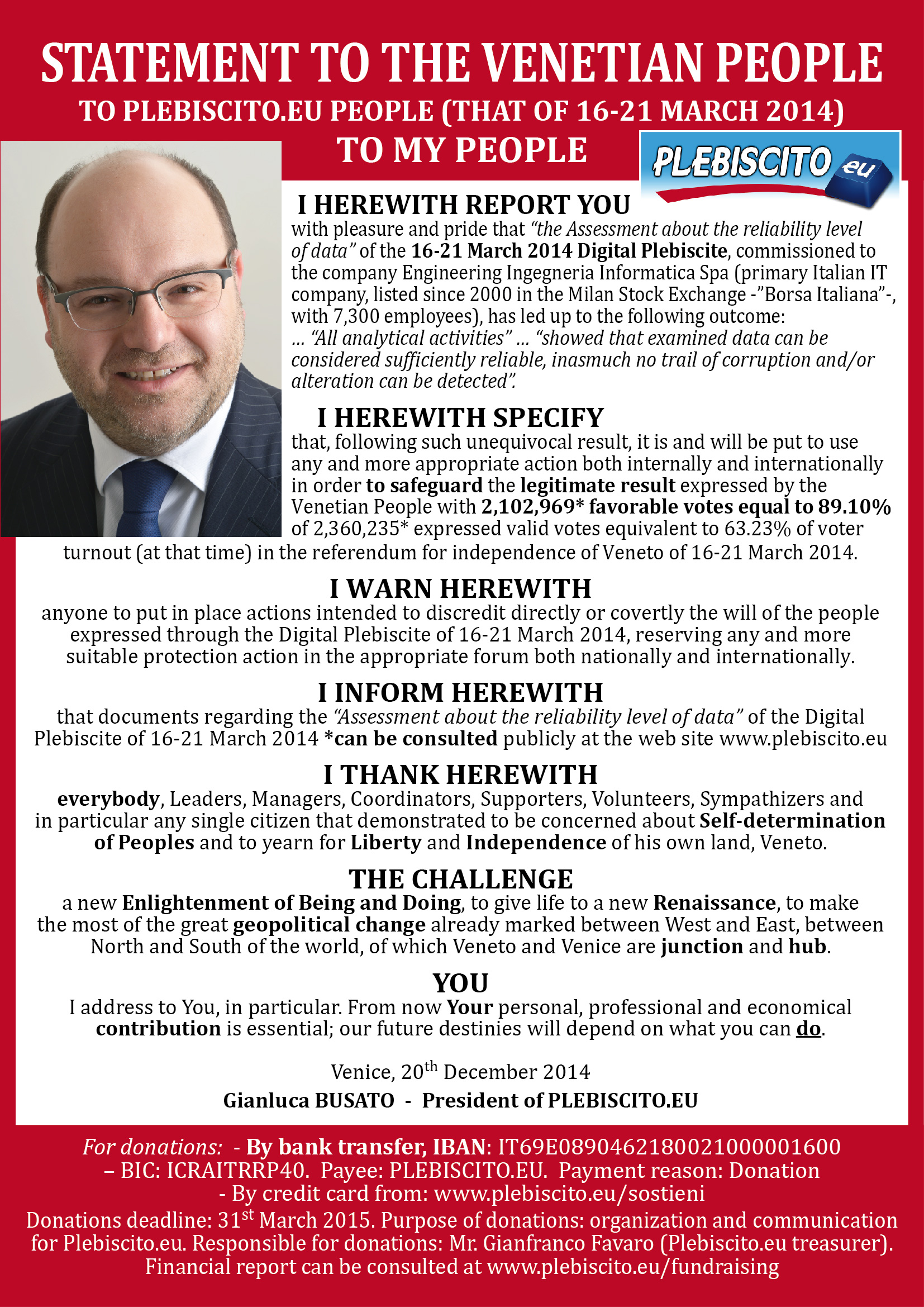 I HEREWITH REPORT YOU

with pleasure and pride that “the Assessment about the reliability level of data” of the 16-21 March 2014 Digital Plebiscite, commissioned to the company Engineering Ingegneria Informatica Spa (primary Italian IT company, listed since 2000 in the Milan Stock Exchange – ”Borsa Italiana” – , with 7,300 employees), has led up to the following outcome:

… “All analytical activities” … “showed that examined data can be considered sufficiently reliable, inasmuch no trail of corruption and/or alteration can be detected”.

that, following such unequivocal result, it is and will be put to use any and more appropriate action both internally and internationally in order to safeguard the legitimate result expressed by the Venetian People with 2,102,969* favorable votes equal to 89.10% of 2,360,235* expressed valid votes equivalent to 63.23% of voter turnout (at that time) in the referendum for independence of Veneto of 16-21 March 2014

anyone to put in place actions intended to discredit directly or covertly the will of the people expressed through the Digital Plebiscite of 16-21 March 2014, reserving any and more suitable protection action in the appropriate forum both nationally and internationally

that documents regarding the “Assessment about the reliability level of data” of the Digital Plebiscite of 16-21 March 2014 *can be consulted publicly at the web site www.plebiscito.eu

everybody, Leaders, Managers, Coordinators, Supporters, Volunteers, Sympathizers and in particular any single citizen that demonstrated to be concerned about Self-determination of Peoples and to yearn for Liberty and Independence of his own land, Veneto.

a new Enlightenment of Being and Doing, to give life to a new Renaissance, to make the most of the great geopolitical change already marked between West and East, between North and South of the world, of which Veneto and Venice are junction and hub.

I address to You, in particular. From now Your personal, professional and economical contribution is essential; our future destinies will depend on what you can do.