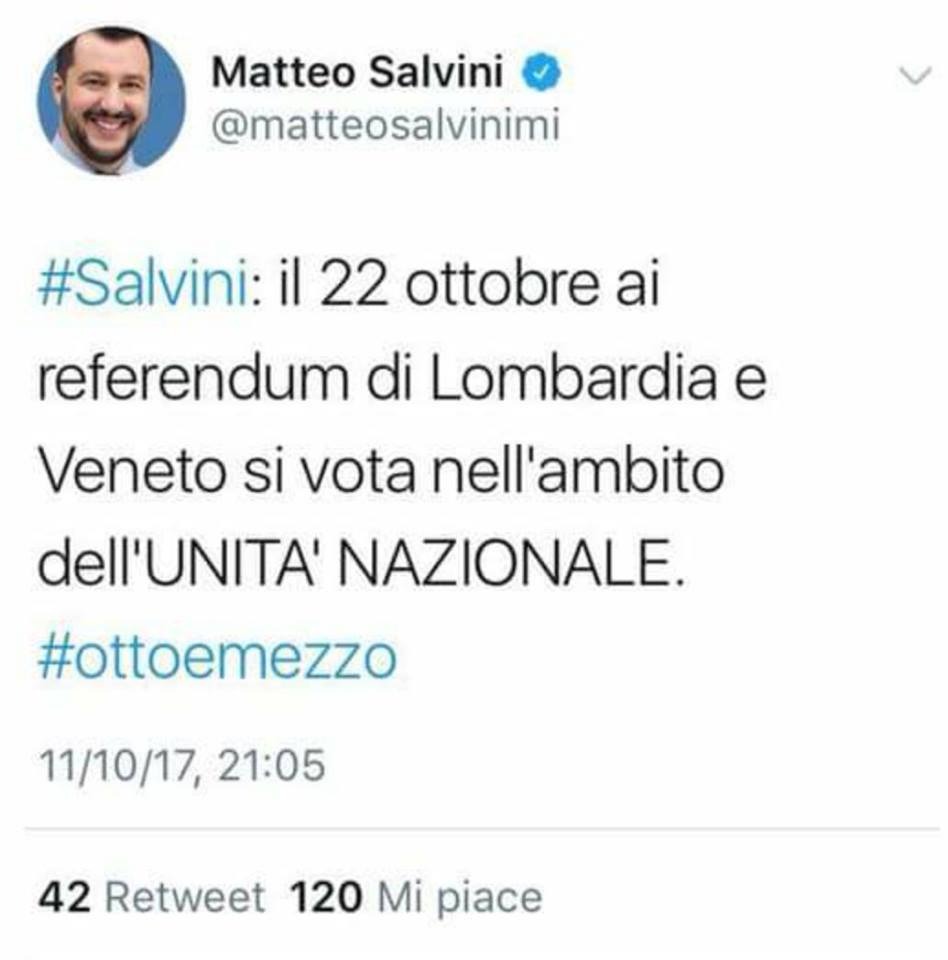 Just a few days before the vote, the northern league freezes the expectations of the true majority soul seeking freedom from Rome. Maroni in Lombardy would be satisfied with a modest 34% turnout. Gianluca Busato: “It’s a mistake. From October 23, the Veneto independence campaign will resume without further distraction”

On Sunday 22 October in Veneto, the regional non-binding referendum for autonomy (or rather the little forms of autonomy made possible by italian constitution), will be voted. Kind of autonomy that in the past few days Plebiscito.eu also quantified economically, demonstrating its smallness: about 1-2% more compared the present 20% of spending regional autonomy on what venetians pay in taxes, not more than 1,5 billions euro (on 73 billions euro yearly payed).

While yesterday a hateful bill of the Italian interior ministry has been delivered to Veneto region for the cost of security during voting operations (just over 2 million euros, a ridiculous own goal of italian government), it is approaching the closure of the campaign dominated by Italian parties, the true protagonists of this consultation, while civil society is seeing passively. Many Venetians will certainly vote, convinced that even if this referendum is useless, this may be a chance to make their voice heard and afraid of the possibility that a low affluence may mean disinterest and therefore greater power in Rome for continue to fiscally harass Veneto. On the other hand there are many pro-independence Venetians who feel betrayed in particular by northern league and Venetian Governor Luca Zaia, who in these days has drastically rejected any future hypothesis of Veneto’s independence.

The campaign for the independence of Veneto is actually the real engine of popular consensus and Sunday’s referendum is the answer of the Italian state to the digital referendum for the independence of Veneto organized by Plebiscito.eu, a movement led by Gianluca Busato, who in 2014 catalyzed the vote of more than 2.3 million Venetians (with a very high turnout of 63.2%) and with a 89.10% who expressed their support for the independence of the Venetian Republic. A few days after the vote, the then interior minister – today at the foreign affairs – Angelino Alfano opened the hypothesis of greater autonomy in the Veneto. Ten days after the referendum and its overwhelming international and popular media success, Alfano’s party, Udc, succeeded in approving the referendum law from the Veneto region, whose most innocuous part survived the darkness of the Constitutional Court and that next Sunday will go to vote.

Today Zaia’s step back from independence, only a few days before the vote, seems a frankly inappropriate move that is likely to play the support, or at least the heat, of many Venetians, despite the great personal follow-up he has and that even in the past the 2015 regional elections guaranteed him an easy electoral victory with the absolute majority.

Voting turnout should in any case be fairly high, though not too high, because all the Italian parties in Veneto (from far-right to left wing) support a referendum that is born just as a desperate Italian attempt to exorcise the independence of Veneto. Yes to autonomy, in any case, will win with percentages above 80-90%. Yesterday, Maroni said he would satisfied with a low 34% turnout in the referendum in Lombardy, a figure that appears to be very modest and certainly would be a “Caporetto” for the Italian parties trying to fight independence with every trick.

Gianluca Busato said: “This move against Veneto’s independence is a mistake. It is a shame that this unfortunate position emerges right in the end of the election campaign: it leaves a bitter aftertaste exactly in who next Sunday is called to increase the turnout of a modest content consultation. More importantly, considering how easily these days Spain is proving to be able to cancel any autonomy of Catalonia with a simple stretch of pen. Let us figure Italy with Veneto! From October 23, the Veneto independence campaign will resume without further distraction”.

FROM CATALONIA TO VENETO, EUROPEAN UNION HAS TO EVOLVE INTO A REAL FEDERAL SYSTEM