PRESS RELEASE: ON MARCH 16 VENETIANS VOTE TO SEPARATE FROM ITALY

PRESS RELEASE: ON MARCH 16 VENETIANS VOTE TO SEPARATE FROM ITALY 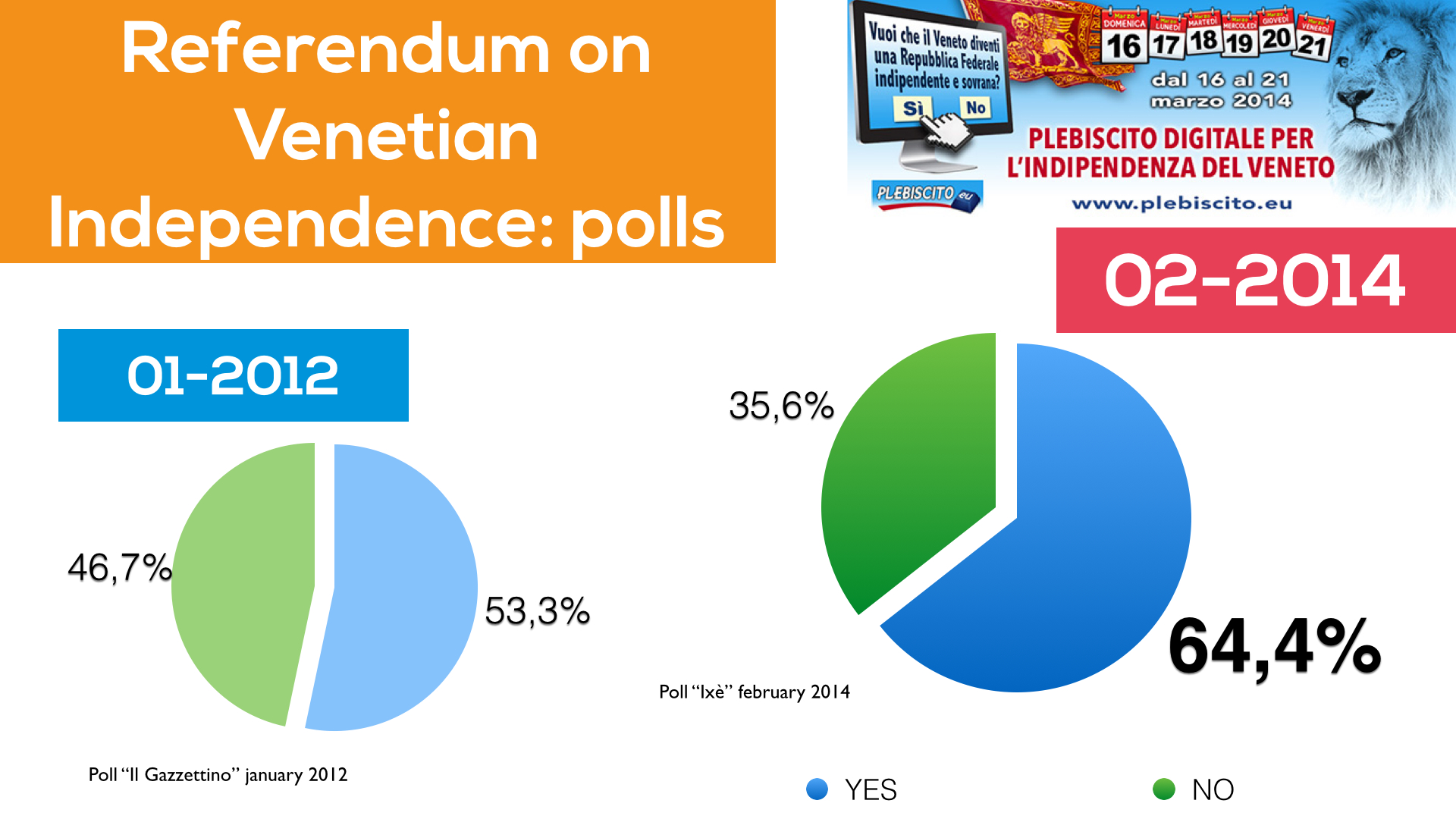 Los Angeles, CA – Like Catalonia in Spain and Scotland in Great Britain, the Veneto Region of Italy is also taking astonishing steps to legitimate with a popular vote a complete political separation from the Italian state, with the intent of resuming the historical Republic of Venice. On March 16, 5 million Venetian citizens living in North Eastern Italy will be called to vote on the following ballot: “Do You Want Veneto to Become an Independent and Sovereign Federal Republic?”

Preparations for the referendum on Venetian independence began on November 28, 2012, when Veneto’s regional government passed, with a majority of 29 out of 36 councilmen, theResolution 44 which pledged to take action and exert the right to self-determination through a popular vote on political independence. Since then 166 town councils have seconded the regional government, passing their own Resolutions citing the urgency of a vote on political independence as a response to the economic crisis that local officials blame on Italian taxation and indebtedness.

All local authorities have provided to the referendum committee Plebiscito.eu vital records information on the 3.8 million Venetian citizens of voting age. Each citizen received by mail a personal “right to vote” code in order to register to vote either through an online web platform or by telephone with an auto-response system. “Besides voting on the issue of independence for the first time in 150 years,” explains Lodovico Pizzati, spokesperson for Plebiscito.eu “Venetians will participate in an official e-voting referendum for the first time ever.” Although an official electronic ballot has never been implemented in Italy, organizers cite the U.K. Estonia, Switzerland and Canada as advanced countries that regularly implement official internet voting. “We are in the 21stcentury, and e-democracy will not only be cost efficient, but it has a cryptographic verification system that makes it more accurate and secure” concludes Prof. Pizzati.

Perhaps fueled by a chronic Italian economic crisis that has particularly plagued the once thriving Veneto region for the past 6 years, support for political independence has been steadily rising in the polls. In January 2012 official polls showed a 53% support, in January 2013 a 57% support, and the latest February 2014 poll shows 64% will vote in favor of political separation from Italy. “We want our Republic of Venice back!” exclaims Gianluca Busato, President of the committee for the Yes vote (venetosi.org), “but we are not nostalgic because it is the Italian state that represents the past, 20th century nationalism and backwardness. Instead we want a future where our firms can compete in a globalized market supported by a small and efficient government.” On the contrary, Pietro Piccinetti, president of the committee for the No vote has stated that is important to participate in this democratic process, but that citizens should vote against separation from Italy.

The Veneto region comprises most of North-East Italy with about 8% of the Italian population. It ranks as the Italian region with the most tourism having several popular destinations like Venice, Verona, Padua, Treviso, the Dolomites, lake Garda, and the Palladian villas surrounding Vicenza. Historically the Venetian Republic was independent from 697 up to 1797 and it was a maritime superpower during the Renaissance. After Napoleon’s invasion for sixty years it was part of the Austrian Empire until it was annexed to the Italian Kingdom with the plebiscite of 1866.