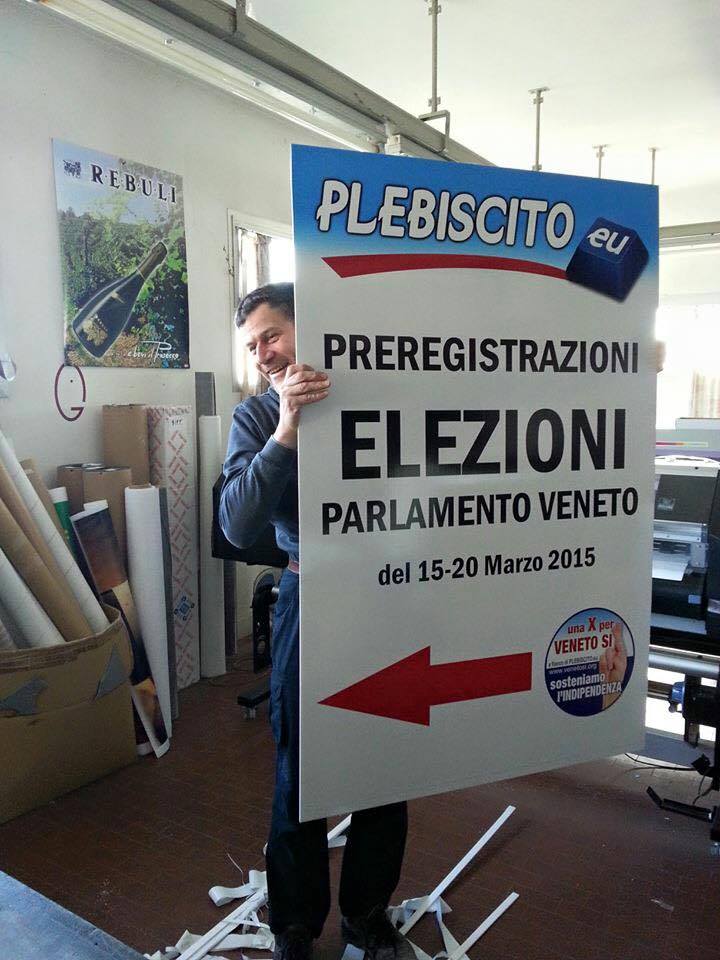 Considering the data initially gathered, at least one million of Venetians is expected to vote during the elections of the provisional Venetian independent parliament. Mr. Gianfranco Favaro says: “You can not deprive a people of its own right of expression.” Mr. Gianluca Busato adds: “Once we will have our glorious Republic back, we will be able to drastically cut the fees down and to keep them into our territory.”

[Venice, 9th of March 2015] – Like the last year, March is the month of the Digital Revolution in Veneto. Once again, the time of the political agenda is beaten by the website www.plebiscito.eu: twelve months ago, thanks to a brilliant digital referendum, www.plebiscito.eu has called the world’s media attention to the Veneto indipendence question. Today, www.plebiscito.eu raises the challenge again with the self-managed elections for the provisional Venetian Parliament.

Comparing the statistical data about the voters’ pre registration of the last year to the ones of the ongoing operation, the organizers of www.plebiscito.eu extimate that at least one million of Venetian voters will choose the candidates to be elected as deputy in the provisional Venetian parliament.

Veneto region has been divided into 42 electoral geographical areas, including a further area which it has been dedicated to the Venetian voters living abroad. Each geographical area will elect two deputies who, together with the Delegation of the Ten, will compose the provisional Venetian Parliament. Three different Venetian lists will run for the elections: Yes for Veneto (‘Veneto Sì’), Life (‘Liberi Imprenditori Federalisti Europei’, ‘Free Federalist European Entrepreneurs’) and Venetian Federated Citizens (‘Cittadini Veneti Federati’).
While in the streets of Veneto you see a great and concrete self organized activity around this important event, all the italian media are silent or misinform to cover up this popular phenomenon. This does not surprise, since Italy is the only Western European country with no real press freedom, as widely demonstrated by the major international organizations monitoring the state of pluralism and the freedom of the information/media systems worldwide.

The elections for the provisional Venetian Parliament is a project which has been gifted of an innovative legal basis, creating a pattern to be followed once again in this historical period of great changes and geopolitical transformation. The importance of this operation becomes even bigger if we think that, the 8th of August 2014, the Italian Government has postponed to the constitutional court the convocation of a new (though muddled) referendum for the independence of Veneto proposed by the Regional Council of Veneto, stopping any possibility for the Venetians to effectively exercise their own right to self-determination through the institutions and laws of the Italian state.

Therefore, it is finally clear, to even the most doubtful ones: the civic referendum process lead by the Venetian digital plebiscite is now assuming a new meaning under the international jurisprudence profile, too.
Gianfranco Favaro, member of the Delegation of the Ten notes:”It is absolutely not possible to deprive a people of the right of expression, especially when it has already democratically expressed itself and, above all, the Venetians have expressed themselves not through a mere private action, yet through a combination of both public and private basis” .
Regarding to this aspect, it is often underrated the fact that Plebscito.eu organized the digital referendum for the independence of Veneto not just acting as a private civic organization, but also in terms of the referendum committee born to allow the concrete application of the regional resolution n° 44/2012, following a deliberation which had been approved by several Venetian municipalities. This resolution, together with the referendum committee, formally announced the digital plebiscite for the indipendence of Veneto, held by www.plebiscito.eu.
After the free expression of the sovereign Venetian people, the Delegation of the Ten of the Venetian Republic (that has been elected in the referendum itself,too) gave start to a provisional period of institutional competition between the illegittimate institutions of the Italian state and the legitimate ones (albeit still in an embryonic and not yet fully stabilized form) of the Venetian Republic.
Now the Delegation of the Ten raises the bets, building up the provisional institutions which will exercise the legislative and the executive power into the new Venetian Republic.

Gianluca Busato commented:” After the election of the provisional Venetian Parliament and the settlement of the provisional Venetian Government, it is clear that the Organization for the Liberation of Veneto will take form. This organization will take more concrete decisions on a formal level, starting from the taxes, which will be drastically lowered and kept into the Venetian territory”.