IN A WEEK VENETIANS VOTE TO SECEDE FROM ITALY. GOVERNOR LUCA ZAIA: “YES, YES I AM IN FAVOR”

IN A WEEK VENETIANS VOTE TO SECEDE FROM ITALY. GOVERNOR LUCA ZAIA: “YES, YES I AM IN FAVOR” 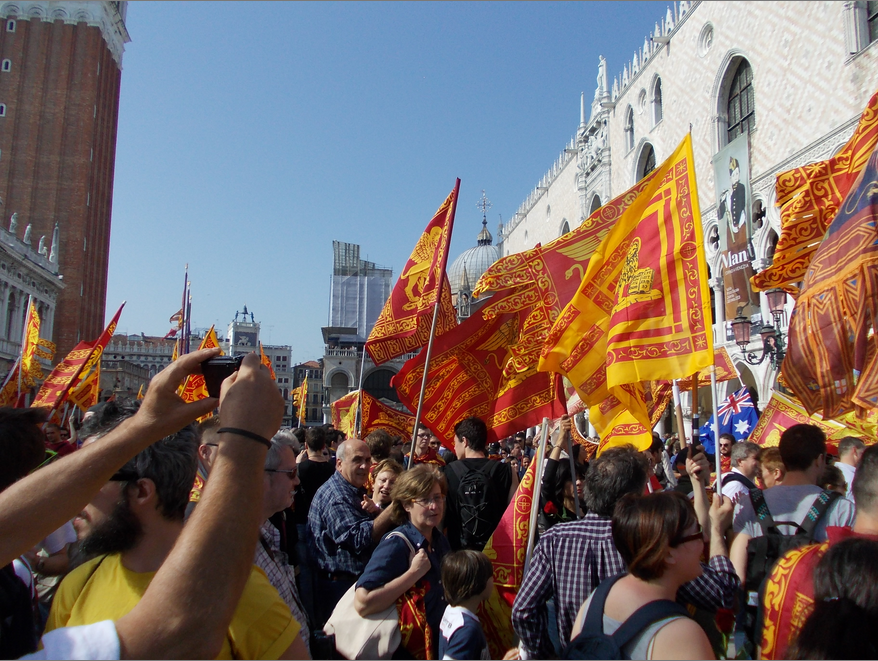 IN A WEEK VENETIANS VOTE TO SECEDE FROM ITALY

GOVERNOR LUCA ZAIA: “YES, YES I AM IN FAVOR”

Raffaele Serafini, referendum organizer: “American military bases will have to pay rent to the Venetian Republic, like the Russians do in Sevastopol”

Los Angeles, CA – In a live interview on Radio 24, Veneto’s governor Luca Zaia was categorical about his total support of March 16 referendum that will ask 5 million Venetians: “Do you Want Veneto to Become and Independent and Sovereign Federal Republic?” Confronted by Italian journalist Giovanni Minoli on the topic of Veneto’s secession (minute 11), Governor Zaia replied: “I am convinced that the process regarding Catalonia, regarding Scotland, within a European perspective, that is accepted by international law, must be proposed and tested with the people”

While Venetian independence was sparked on November 28, 2012, when Veneto’s regional government passed the Resolution 44 which pledged to exert self-determination through a popular vote on secession from Italy, the referendum committee Plebiscito.eu took it a step further including the election of delegates with the mandate of making the referendum result executive. In case of a separatist victory, and the latest poll indicates that 64% will vote for secession from Italy, it is not clear if it is the newly elected delegation or the sitting regional government that has the right to declare independence.

“Zaia must go home!” declares Raffaele Serafini, a prominent rally organizer in Vicenza’s province and candidate as delegate for secession. “Venetians not only want out of Italy, but we also want out of the Euro, the EU and Nato. It’s not just declaring independence, it is also making it immediately executive. Next week’s vote will legitimate our actions, and I will make sure the U.S. starts paying rent for their military bases in Vicenza and Aviano, just like the Russians do for their bases in Sevastopol.”

Of a different opinion is Gianluca Panto, president of Veneto Business, a consortium of Venetian industrialists that have financed Plebiscito.eu. Gianluca Panto, member of a prominent family in Treviso’s province, has stated that an independent Veneto must keep the Euro as Veneto’s economy is very integrated with Germany and the rest of Europe, and adding an independent currency to this process would just be bad for business. Veneto Business has privately financed the information campaign, including 4 million letters sent to all citizens with voting instructions.

Despite contrasting views on what to do after independence, secessionists have managed to converge within the same committee: VenetoSi.org. While the polls predict a secession approval, Italian unionists are confident that at the end Venetians will choose to stay in Italy. “It is anachronistic to think of a Europe made out of regions when we should strive for a Europe of stronger nations.” said Pietro Piccinetti, president of the committee for the No vote “We want to change, but within a stronger Italy.”