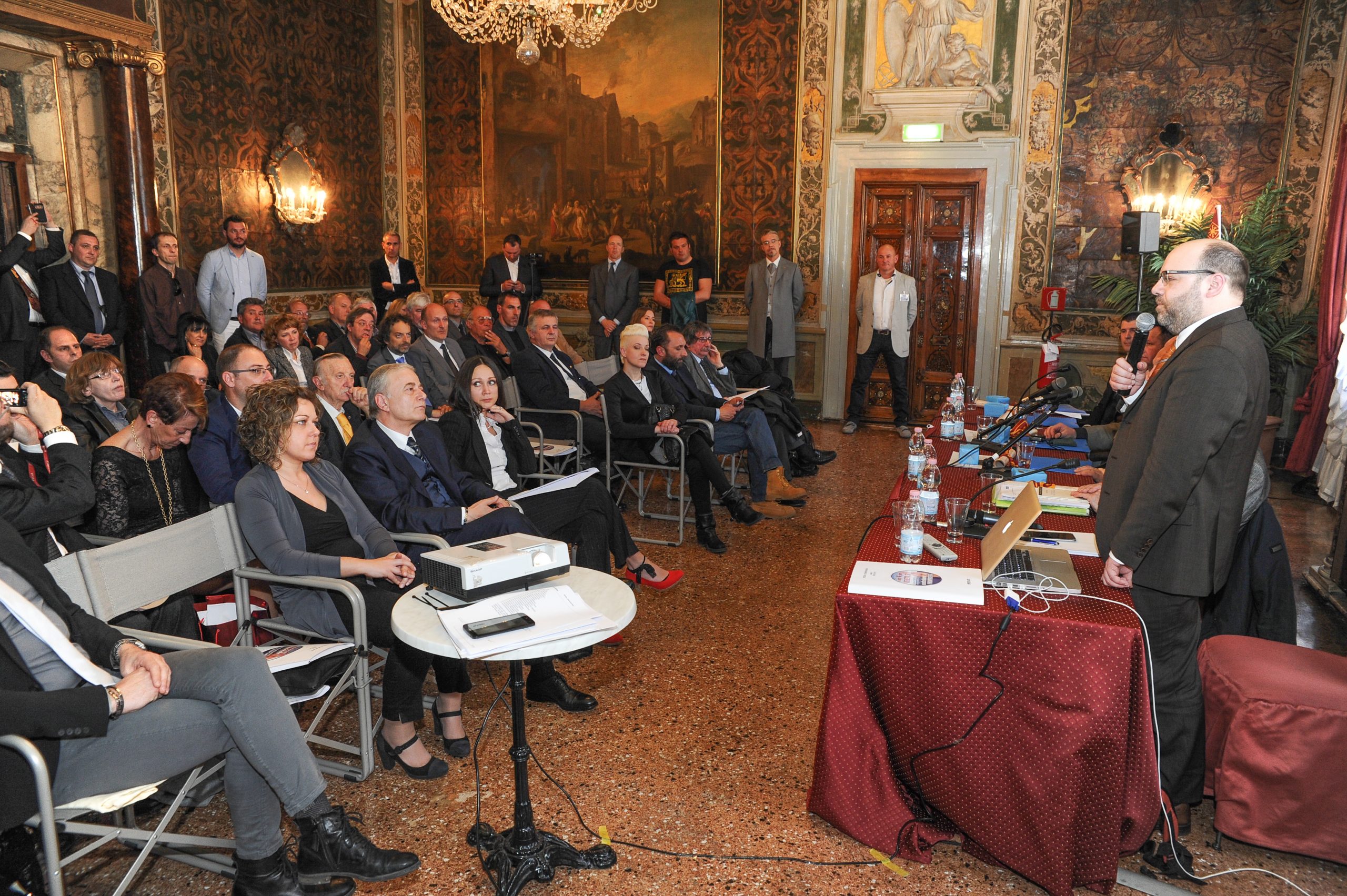 In Venice, on the 28th of March 2015, the Commission of International Observers has delivered to Plebiscito.eu the Final Report on the Referendum, held in Veneto from the 16th to the 21st of March 2014. Gianluca Busato states: “The plebiscitarian majority for the independence of Veneto, now is politically binding. We will move to the international level. “

[Venice,30th of March 2015] – On the 28th of March 2015, in the beautiful setting of the Fireplace room at Ca ‘Vendramin-Calergi in Venice, a new page of history has been written: the International Observers Commission (IOC) delivered the Final Report on the referendum for the independence of Veneto, held from the 16th to the 21st of March 2014.

The event, introduced and moderated by prof. Romano Toppan, saw the contributions from the IOC, chaired by the former Ambassador of Georgia in Italy, dr. Beglar Davit Tavartkiladze and the President of the Organizing Committee of the Referendum, Plebiscito.eu, dr. eng. Gianluca Busato. After the end of the ceremony, the IOC was saluted with a thanksgiving cocktail and musical farewell in the adjacent Regia room.

The IOC, comprising observers from different nations of the world (including the United States, the Russian Federation, Ukraine, Syria, Moldova, Georgia, Czech Republic) and representatives of an arc of plural political orientations, has been selected by the president of the Commission (invited by the Organising Committee for the purpose of the referendum), according to the principles laid down by the EU Commission Communication 191 on assistance and monitoring during the elections.

The Final Report of the IOC is composed of a long relationship which has analyzed every step of the referendum:

The conclusions are summarized as follows:

“The IOC performed a series of checks on the organizational level of the referendum, in order to guarantee the vote to be authentic, free and legitimate.

It was found that the votes were carried out under a responsible and transparent method and that the voting system provided a real choice to the voter.

The elections have been conducted in a free environment: voters have been able to express a preference, free and far away from any intimidation, violence or administrative interference.

It was ensured the secrecy of the vote, except for limited cases of persons who were unable to cast their own vote electronically without assistance.

In addition, the vote count was honest, without the possibility of alteration, and the proclamation of the vote was timely.

The observers were free to check, directly and indirectly, all the stages of the voting process before, during and after the referendum.

The IOC, analyzing all the elements above, finds out that the Referendum for the Independence of Veneto, which took place from the 16th until the 21st of March 2014, was held according to the principles required by the international organizations and, in particular, the principles of the CSCE/OCSE Document of the Copenhagen Meeting of the 26th of June 1990.

The IOC considers that the use of electronic voting in a controlled environment, such as the Internet, provides greater security and secrecy than what the conventional systems may do and that the telematics procedure of this Referendum is innovative, since it minimizes the possibility of electoral fraud.

The IOC considers that the minor irregularities and some difficulties before and during the vote can be minimized through the creation of a permanent federal structure, in order to better organize the process of e-voting.

The IOC President invited its members to meet in Venice, in order to discuss the recommendations of the Final Report, on the 27th and 28th of March 2015.

The Final Report of the IOC, after his presentation to the press by its President, was then signed by the international observers present in the majority and delivered to the President of the Organizing Committee of the Referendum, Plebiscito.eu, mr. Gianluca Busato, who has so commented: “The IOC, in accordance with the provisions of the international law, confirms the free and democratic expression of popular sovereignty of the Venetian People in favour of the independence of the Venetian Federal Republic, with a voting majority which is ‘plebiscitarian’ and unequivocal. Today the referendum for the independence of Veneto officially becomes an institutional and politically binding fact “.

“Plebiscito.eu thanked the IOC for its high professional and ideal practice that allowed the Venetian People to exercise and see recognized its right to self-determination, in accordance with the principles, standards and procedures prescribed by the international law.”

‘We can assume as definitively ceased all the needs to carry out any other institutional verification of the will of the Venetian People, because every other attempt to play a new regional referendum would be useless, harmful and disrespectful of the already certified popular sovereignty. Now officially starts a phase of relationships together with all the states and the international organizations towards the recognition of the independence of the Venetian Republic”