INDEPENDENCE OF VENETO: INTERNATIONAL POLITICAL CERTIFICATION OF THE REFERENDUM IN VENICE ON NEXT 28TH MARCH

INDEPENDENCE OF VENETO: INTERNATIONAL POLITICAL CERTIFICATION OF THE REFERENDUM IN VENICE ON NEXT 28TH MARCH 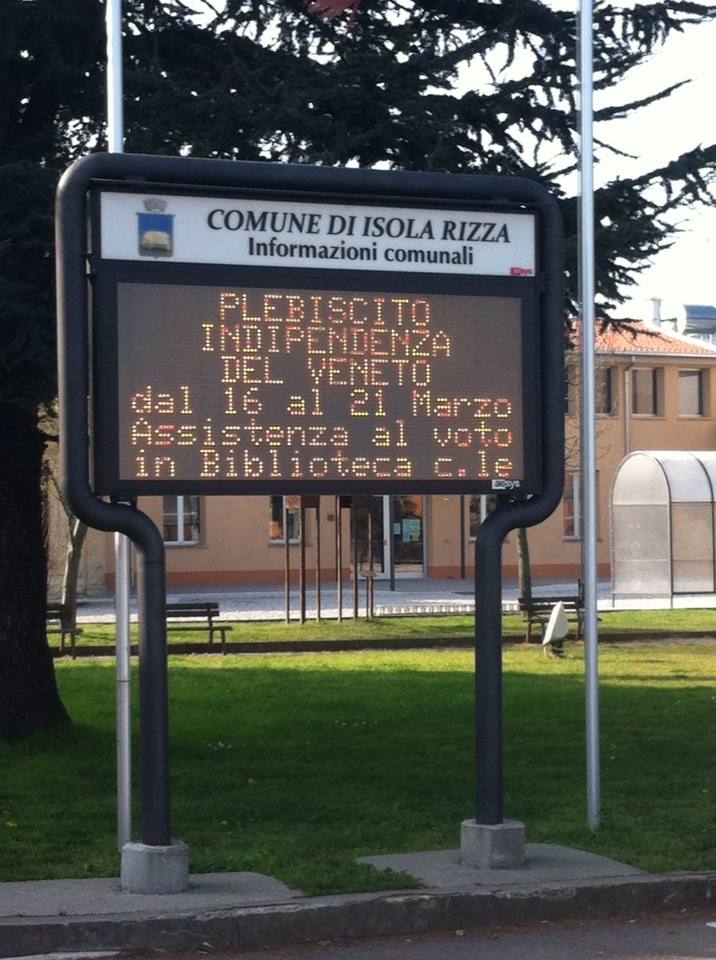 DAY OF INTERNATIONAL STUDIES AND CEREMONY

Presentation of the Final Report on the international politic certification of the votes gathered during the Referendum for the independence of Veneto.

VENETO 2015-2025: THE NEW SILK-ROADS AND THE NEXT FUTURE OF A LAND WHICH IS GOING TO RETURN TO BE A STRATEGIC HUB FOR THE WHOLE MANKIND HISTORY AND THE DEVELOPMENT OF GLOBAL TRADES.

The association Plebiscito.eu and a group of international ambassadors and observers will have a diplomatic and technical meeting. Venice was not chosen by chance: more than being the capital of the Serenissima Republic, it is a city which now is ready to come back as a new strategic centre for the whole planet Earth.
– – –

One year after the referendum for the independence of Veneto (digitally held from the 16th to the 21st of March 2014) that raised many passionate debates both nationally and internationally, on Saturday the 28th of March 2015 from 03.30 PM to 06.00 PM, in the room Camino and Regia of Ca Vendramin Calergi – Venice, there will be a specific ceremony for the delivery of the international politic Final Report Certification on the referendum.

[Venice, March 26th, 2015] – The referendum committee Plebiscito.eu announced that the certification procedure has been carried out by a committee of international observers headed by the former Ambassador of Georgia in Italy, dr. Beglar Davit Tavartkiladze and composed of observers from different nations of the world (including the United States, the Russian Federation, Ukraine, Syria, Moldova, Georgia, Czech Republic) and representatives of a plural arc of political orientations.
The Plebiscite was convened by the referendum committee Plebiscito.eu in collaboration with different municipalities of Veneto, under the Resolution n° 44/2012 of Veneto Region and freely took place from the 16th to the 21st of March 2014.

“The certification procedure was conducted in compliance with the dictates of the international law and the provisions of the international organizations who are responsible for monitoring the regularity and democratic nature of the vote during the elections. Especially, the compliance with the provisions of the OSCE standards on elections and referendum has been assessed”, explains the engineer mr. Gianluca Busato, president of Plebiscito.eu.

The question put to every citizen resident in Veneto, in deference to the extensive and not ethnic principle of nationality including the legal residence, was as follows: “Would you like Veneto to become an Indipendent and Sovereign Federal Republic? Yes or no? “.
The participation in the referendum and the answer to the question was made via internet and telephone. Several international observers were invited to monitor the referendum for its entire duration.
At 07.00 PM of the 21st of March 2014, the final result of that referendum was the following:

“This event is a key element to strengthen the scope of the referendum for independence of the Veneto, after its trustworthiness had been questioned by some national newspapers while a subsequent survey conducted by Demos confirmed the high voter turnout.” Says mr. Gianluca Busato.

The results of the referendum have been collected into a database that was later scientifically and technically verified by an italian informatic company leading the market both nationally and internationally, that is the Engineering Ingegneria Informatica Spa who, on the 20th of December 2014 has issued an “Assessment on the reliability level of data” with the following results: … “All analytical activities” … “have shown that the examined data can be considered sufficiently reliable, as there are no detectable traces of corruption and / or alteration.”

The digital referendum is thus an example of a great innovation which is technological, conceptual, political, democratic and civic, too. To report the words of the Indo-American researcher and international renowned geopolitical and strategic consultant mr. Parag Khanna: “ it allows not only Veneto, but the whole world to make an evolutionary leap into a new form of interconnected civilization”, specifies mr. Busato.

The certification of the votes of the referendum proves then the final piece that will allow the Delegation of Ten (elected together with the referendum itself and lead by the eng. mr. Gianluca Busato) to formalize various international relations with all those foreign government institutions and intergovernmental bodies which are relevant to recognize the results of the referendum. The debate will focus also on the new perspectives opening to Veneto the light of some large international financial investment for the realization of the new silk roads within 2025, which will see Venice and Veneto to become (even if we would prefer to use the form “to come back as”) a strategic hub and center of gravity for the international trades.

The ceremony will be presented and moderated by prof. mr. Romano Toppan, expert of International Programs of Local and Sustainable Development in many italian regions and abroad, particularly in the context of the activities of the ‘International Labour Organization, the Council of Europe and the European Organization.

Plebiscito.eu wants to explain how the answer to the question implied a will which is binding and explicit, to transform the current administrative italian region called “Veneto” (seen in its current boundaries which have not been determined by the Venetian people but boundaries within which the Venetian people is residing for centuries) into an independent statehood entity with its own sacred sovereignty, just like all the other nations of the world, being moreover federated inside itself, following the Venetian Republic pattern for the forms the democratic will of the Venetian people intends to give to its welcome back mother country.
“Among other things, there are no alternative ways of pronouncement for the Venetian People on its right of self-determination, as required by art. 1 c.2 of the UN Charter and even sanctioned by the same Italian law n. 881 of 1977 which ratified the International Covenant of New York of 1966, violated in its own dictation after the Italian government has prevented any further attempt of institutional pronouncement for the Venetian People through its Council of Ministers: the italian Constitutional Court, through its own resolution of the 8th of August 2014, challenged the regional law of Veneto n. 16 of 19th of June 2014, whose main aim was to call for a new referendum for the independence of Veneto”, says Plebiscito.eu.