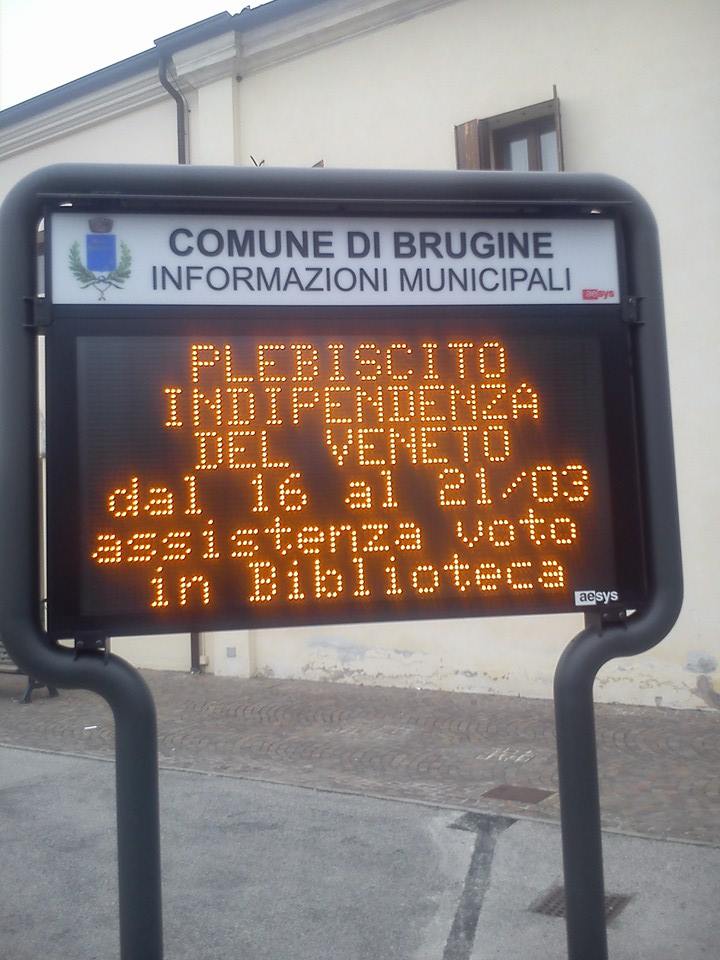 OVER 1.3 MILLION VOTES ON VENETO’S INDEPENDENCE
MASSIVE RALLY ON FRIDAY IN TREVISO TO DECLARE SOVEREIGNTY

Los Angeles – At the end of the fourth day of the referendum for independence of Veneto, 1.3 million Venetians have cast their vote on whether to secede from Italy. The final tally will be announced Friday, March 21, during a massive rally in Treviso. Prior to the vote polls indicated a 65% approval for the rebirth of the Venetian Republic, and the ten delegates who will be elected as part of this popular vote are ready to sign a declaration of independence and take immediate executive actions.

“If a majority of citizens participates and the Yes vote wins, we will immediately exercise a total tax exemption,” declares Gianluca Busato, leader of the independence movement. “Reaching an absolute majority of 2 million votes is a concrete possibility, and Italy will no longer have sovereignty over Venetians. During the initial period of transition we will not pay a single cent of taxes to the Italian state.”

Busato’s statement can be read without if’s, as independence is expected to win with a wide margin. Even the issue of reaching an absolute majority becomes secondary. There is no quorum threshold established by Plebiscito.eu to consider the referendum valid, and even with a large minority people are expected to put into practice what would then be a tax revolt.

“Of course higher the turnout, greater the legitimization, no matter what Italy and its constitution have to say,” comments Lodovico Pizzati, spokesperson for Plebiscito.eu. “We are not talking about a forceful takeover, but people have sovereignty over their wallets. Already a critical mass does not recognize the Italian state as a legitimate tax collector anymore, and the avalanche will fall on Friday, no matter what the final vote tally is.”

The five million inhabitants of the Veneto Region pay each year 70 billion euro in taxes, of which 21 billion are direct taxes, 22 billion are indirect taxes, and 21 billion are social security contributions (source Italian Treasury’s CPT database) Details on how Venetian firms must refuse to pay social contributions, income taxes for their employees, and VAT taxes will be exposed during Friday’s rally in Treviso. Even if a fraction of people who voted in favor of secession participate in this total tax exemption, the impact on Italy’s tax revenues will be deadly.

Towards the independence of Veneto Region: We are the heirs of the Most Serene Republic