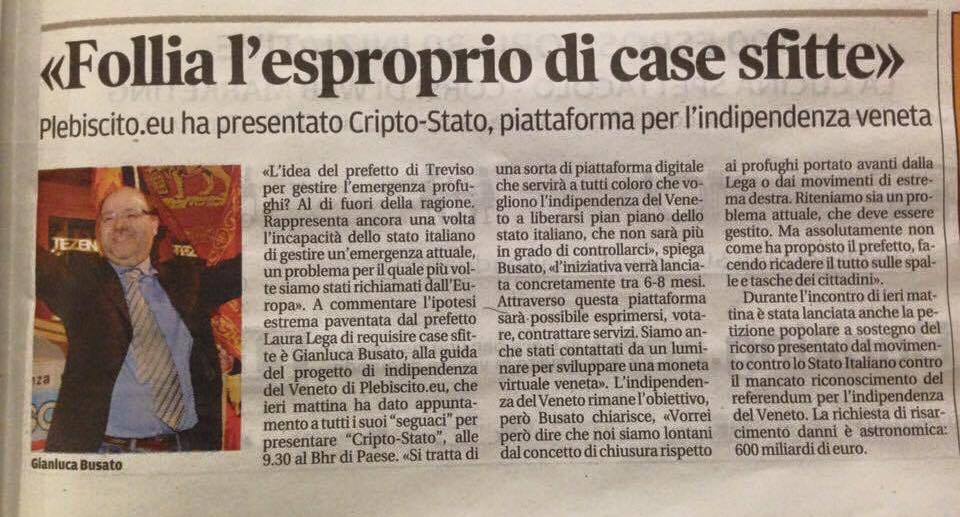 The project for a new digital platform that will set the Venetian citizens free from Italy, has been launched yesterday in Treviso. A Venetian crypto-currency will also be issued. In doing this, modern technologies such as blockchain and smart contracts (similar to the ones used in Ethereum and Tezos) will be used. Moreover, Plebiscito.eu has officially powered up a popular subscription for supporting the Appeal against Italy presented by Gianluca Busato to the Strasbourg Court.

[Treviso, 22nd of February 2016] – Yesterday, in a crowded room of the BHR hotel in Treviso, Plebiscito.eu presented the first preview of its Crypto-State project, that is the digital platform which will definitively turn Veneto into an independent nation. A new strike for the organization become famous thanks to the digital referendum held from the 16th to the 21st of March 2014 for the independence of Veneto.

As usual, Gianluca Busato takes on this new challenge on the technological innovation soil, that is to say the field where even the most advanced legal/economic subjects and social deep changes can take their own shape.

In 2014, the use of a brand-new form of technological innovation allowed Plebiscito.eu to bypass the regulatory blocks against celebrating a referendum for independence, which instead have stopped all those who thought to act in the old way in a world that has radically changed.

Now, after the astonishing certified results gathered with the digital referendum, expressing that the overwhelming majority of Venetian citizens are in favor of independence from Italy, Plebiscito.eu’s next step is to create a technological architecture to allow the Venetians to live their own lives and lead affairs independently from the meddling of the Italian state.

As Uber has enabled travelling people to match other people who could provide with this service, bypassing the old conniving taxi drivers guilds and the public administrations,too, the digital platform which will be made available from Plebiscito.eu will allow the Venetians to access the desired services without the Italian state could even know it has occurred.

This will be made possible thanks to the particular technological structure which will be adopted, having the genetic feature of being impossibile to be controlled by external agents. The Economic transactions for the obtained services will can take place directly into the platform, through a Venetian crypto-currency. Any Venetian citizen holding a personal account in crypto-currency, will be able to pick them up for doing what he likes better. For example, the Venetian crypto-currency may be used in exchange systems to turn them into euro, dollar, yuan or in other crypto-currencies, such as bitcoin.

The public provided services will be the evidence of that complex and innovative technological architecture that will make them possible.

Some examples of the public services the Venetian citizens will be provided with: from the digital citizenship and residence to the electoral system, from the tax system to health, state and social services. In addition, the Venetian citizens will can also offer and request guaranteed and certified private services, remaining completely anonymous in front of the Italian state.

The data of the Venetian crypto-state will enjoy an intrinsic protection, afforded by the different adopted technologies which will range (depending on the needs) by public or private encrypted distributed systems, using for example the blockchain or other P2P technologies or even traditional database.

From a technical point of view, the under construction public registry and contracts system (with public and private ledger and smart contracts technology) is similar to the one provided today by Ethereum, with a particular focus on the adaptability features that guarantee a long term “technological” shelf life, as suggested by Tezos’ position.

On the political side, Plebiscito.eu has officially powered up a popular subscription for supporting the Appeal against Italy presented on the 21st of December 2015 by Gianluca Busato to the European Court of Human Rights in Strasbourg. The petition can be signed during any public event of Plebiscito.eu, at the territorial gazebos and also online at this link www.plebiscito.eu/petizione.

The Appeal arises from the Italian state’s violation of multiple articles of the European Convention on Human Rights and Fundamental Freedoms (and of the subsequent protocols) that took place with the Constitutional Court verdict 118/2015, which, in being unappealable (it has exhausted the internal degrees of judgment), allowed Gianluca Busato to appeal the Strasbourg Court.

Moreover, the Appeal asks the Court for recognizing:

– the subsequent declaration of independence of Veneto.

– the reparation claim towards Italy for all the direct and indirect damages suffered by the Venetian citizens. It has been estimated at 600 (six hundreds) billions of euro, equivalent to the undiscounted fiscal residue of Veneto of the last thirty years.

The yesterday meeting in Treviso was the first of a series of events that will touch every Venetian department. The next session is at the Base Hotel to Work in Noventa di Piave on Sunday the 13th of March 2016 at 9:30 am.