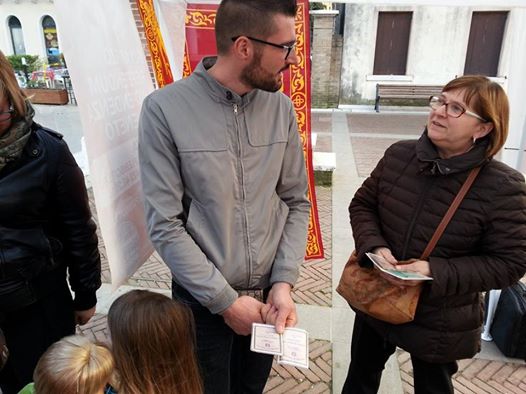 REFERENDUM ON VENETO INDEPENDENCE:
ON FIRST DAY ONLY HALF MILLION VENETIANS PARTICIPATE IN HISTORIC VOTE

Washington, DC – Of the five voting days for the referendum on Veneto’s secession from Italy, from Sunday March 16 to Friday the 21, organizers were expecting most of the turnout on the first day. Instead, at yesterday’s 10pm voting booth closing, only 492 thousand votes were registered by the system: about 11.5 percent of the electorate. If this trend holds for the next five days, the two million mark absolute majority will be reached, and the selected delegates can proceed with the declaration of independence as planned.

Some referendum committee’s organizers are however skeptic that this trend can be sustained. “Initial turnout on the second day of voting is encouraging, but we expect the trend to gradually diminish each day” says Lodovico Pizzati, spokesman for Plebiscito.eu, “this is an historic achievement because until yesterday we only had statistical polls, but now the people have spoken.”

Of the seven Venetian provinces, Vicenza, Treviso and Padua registered well over one hundred thousand votes each. More disappointing were the provinces of Venice and Verona with only tens of thousands votes each. The less populous Rovigo and Belluno provinces counted almost ten thousand votes combined. Organizers blame the sub par performance in Verona and Venice to delays in the distribution of electoral documents to the entire population.
Election material has yet to be distributed in the cities of Verona and Venice, the two most populous Venetian towns. “We have volunteers working non stop making sure everyone has a chance to vote. It’s a race against time,” explains Gianluca Busato, president of VenetoSi.org, the committee for the YES vote. “I am convinced that the voters turnout can be sustained throughout the week. We can reach an absolute majority. Our independence will be legitimate thanks to the support of a majority.”

Veneto is one of the richest regions of Italy, and secessionists are determined to exercise their sovereignty, once legitimized by a vote, not by physically occupying squares nor with other uses of force. More simply, separatists are planning to stop paying taxes to the Italian government, and pay only a fraction to local governments in order to finance public services like health care, education, the pension system and public safety.