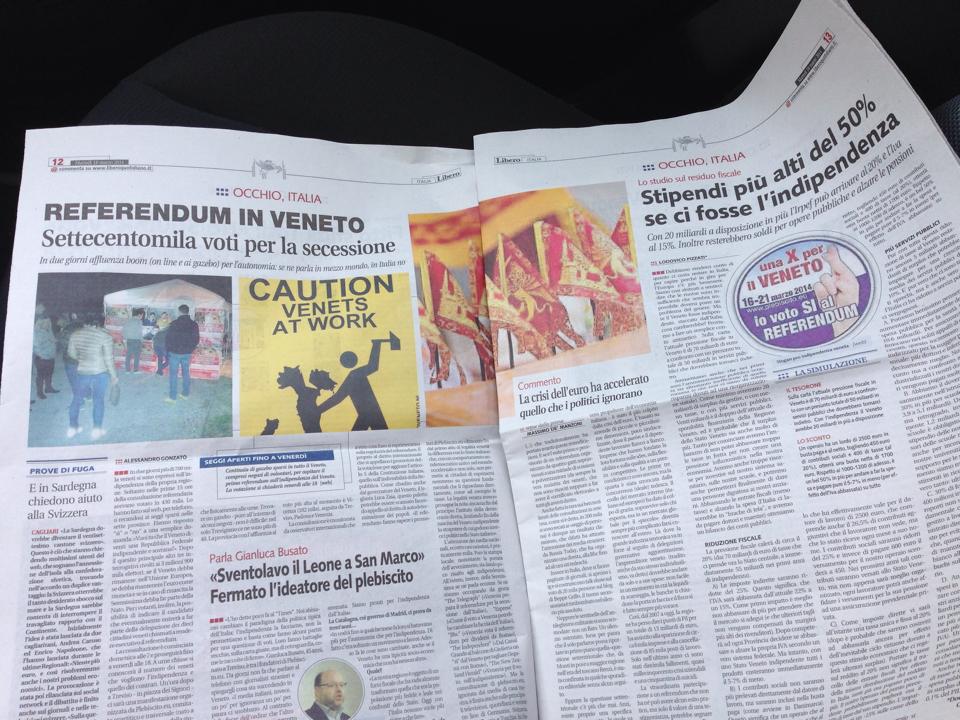 US STATE DEPARTMENT ON VENETO AND CRIMEA: “EACH SITUATION IS DIFFERENT”

Washington, DC – 750 thousand Venetians have so far voted in the referendum to separate Veneto from Italy. The percentage of Yes votes will be announced Friday evening by Plebiscito.eu, the referendum committee in charge of the voting process. There are four more days of voting and no one questions a landslide victory for independence as last month’s poll indicated a 65 percent preference for restoring the Venetian Republic.

The real question is if secessionists will reach a large enough turnout to have an absolute majority. Out of 3.8 million registered voters, 1.9 million Yes would suffice for things to get serious. “We are not only going to declare independence, but we will immediately put it into practice,” says Gianluca Busato, president of VenetoSi.org, the coalition that has gathered all independence movements under one umbrella. “The complete transition may take weeks or even months, but we will immediately take control of tax revenues.”

Veneto is one of the richest regions in Italy, and its main asset is not natural resources, but millions of taxpayers who are fed up with financing Rome and getting little in return. The referendum campaign was financed by Veneto Business, a trade union of Venetian industrialists. “We are organized to stop paying taxes to Rome, and we will pay only a fraction of what we pay now to the Venetian Republic to administer the public good” says Gianluca Panto, president of Veneto Business. “We just need to be legitimized by the will of the people and we can’t wait. The momentum is building as more and more firms are ready to take this step.”

On March 17, during the U.S. State Department’s daily press briefing, deputy spokesperson Jen Psaki commented on the referendum on independence of Veneto. When asked to explain the United States’ position in comparison with Crimea, Ms. Psaki stated “each situation is different” explaining tha Crimea is a case where Russia intervened militarily.

The opposite is true for Veneto, where instead of outside influences, everything surged as a grass root movement fueled by social network campaigning and an innovative e-voting approach. “I am surprised by the sustained participation in the second day of voting. We were expecting to get the bulk of votes on the first day” says Lodovico Pizzati, spokesperson for Plebiscito.eu. “thanks to the international attention that forced the Italian media to do its part and inform citizens, the support went viral and a quorum is now a true possibility.”