BREXIT WILL HELP THE INDEPENDENCE OF VENETO AND TRIESTE

BREXIT WILL HELP THE INDEPENDENCE OF VENETO AND TRIESTE 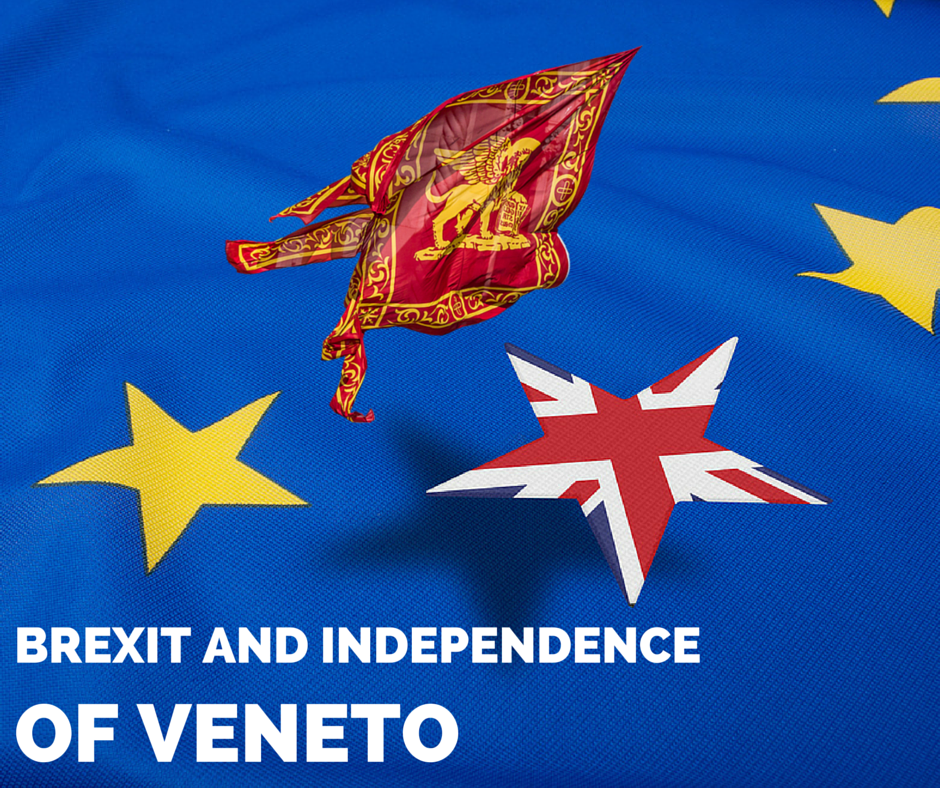 Scotland, economic effects on Italy and Venetian crypto-currency are the triggering effects which will accelerate the path toward the Venetian Republic in case of Brexit. Busato: ”International investors will invest into North Adriatic area through the independence of Venice and Trieste”

[Koper – Capodistria, Slovenia – 2 June 2016] – If last week the Brexit hypothesis seemed to lose ground, just the other day a survey by The Guardian revealed an unexpected reverse of polling assumptions, with 52% of voters in favor of UK leaving the EU through the referendum fixed on 23 June in UK.

There are no doubts that such an event would bring significative consequences and a change of current equilibrium in many areas. For what concerns us the question is: which kind of effects would have the Brexit on our goal of Venetian full independence? Would it be helpful or not?

Our opinion is that this new scenario would accelerate the path toward the Venetian independence. Let’s analyze together the reasons for this outcome.

A first element of acceleration is the Scotland reaction to Brexit. Surveys are currently revealing that the net majority of Scots is in favor of remaining in the EU, and Scottish National Party leaders, beside many commentators, already said between the lines that this new scenario would imply an immediate refocus on a new referendum for Scotland independence. The rest of the population seems now to share this view and, in case of Brexit, it would consider EU (and maybe even USA) as a new ally. Just like happened in 2014, this situation would foster all independence movements around Europe, especially in Catalonia and Veneto, with snowball effects which would be really challenging for Spanish Government to limit, as currently facing a governance crisis, as well as for Italian Government.

A second element is directly linked to Italy and to economic consequences caused by Brexit. Yesterday OCSE evaluated a net loss of 1% on Italian GDP directly related to UK leaving EU, a loss caused by the UK shock (0,4%) and the EU shock (0,6%). Under the financial point of view, Italy would suffer an increase of 40 basis points on investments risk premium and shares and 20 basis points on the spread of interest rates. This scenario would further harm the already agonizing economic situation especially in Veneto, with 13 banks showing deep crisis, after a 125% increase of credit to Venetian firms (at current prices) within the first 12 years from the creation of the Euro, while only 39% of economic growth during the same period. The independence option would for sure gain from it, keeping in mind the complete absence of reliable alternatives. Few days ago the Italian economist Zingales underlined the current under-evaluation of the crisis, proved by the fact that the Venetian financial institutions are simply taking time, while Atlante fund “is already using 2,5 billions out of 4,2 collected to recapitalize the two Venetian banks, but it is not sure that this action will be enough for the recovery”. According to Zingales the only solution is a government intervention, asking for recognition of systemic crisis and for the intervention of European Stability Mechanism ESM, following the Spain example which asked for 40 billions to save the local financial institutions. This would of course mean the official intervention of the well-feared Troika.

The last element that must be considered is Plebiscito.eu project, which plan to shortly launch the new independent Venetian crypto-currency based on blockchain technology (as the bitcoin), which will allow the availability of multiple services through an independent crypto-state, just like the Estonian model. This infrastructure will become a sort of “Uber” applied to Public Administration, and will permit the removal of the Italian state as intermediator thanks to this technology.

Plebiscito.eu President, Gianluca Busato, organizer of the Venetian independence referendum on 16-21 March 2014, through which 89,10% of 2,36 millions voters expressed their will of independence (referendum officially validated by the first IT and certification firm from a Committee of International Observers) and entrepreneur who is currently leading firms located in Treviso, Koper-Capodistria and Nova Gorica, declared: “the combined effects of those factors will boost the path to the full independence of Veneto Region. This will be reinforced by the actions of a business community we have created, focused on private equity and venture capital in Venetian, Julian and Slovenian areas and interested in investing in a full independent and geo-politically strategic area which includes Venice, Verona, Trieste, Koper-Capodistria and all north Adriatic, which will be able to cover an “hinge” role towards the new sea and land corridors between Asia and Europe”.

AIUTIAMO I VENETI IN CRISI