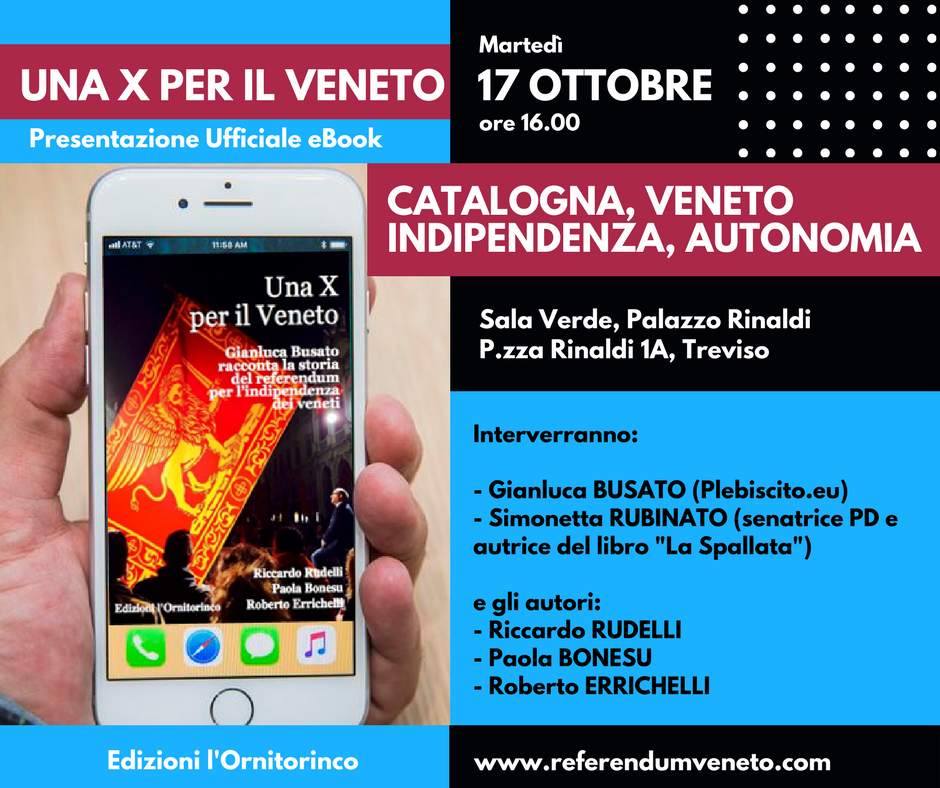 An interview with Gianluca Busato on the 2014’s referendum for the independence of Veneto and a debate with PD’s senator Simonetta Rubinato on “Catalonia, Veneto, Independence, Autonomy”

These are important days in Catalonia and the wind of independence blows strong all over Europe. Also in Veneto, where a digital referendum on independence has been voted in 2014 thanks of the organization of Plebiscito.eu, leaded by the venetian entrepreneur Gianluca Busato.

After the 2014’s referendum on independence, now the Italian government has challenged Busato and his desire for Venetian independence by sanctioning a non-binding “autonomy” referendum to be held on October 22.

In this particular situation, next Tuesday 17thOctober in Treviso, in Sala Verde in Palazzo Rinaldi’s Town Hall at 4 pm local time, will be officially presented “Una X per il Veneto” (www.referendumveneto.com), a new eBook which tells the real story about the referendum of independence of Veneto of march 2014, in which an overwhelming majority of 2.1 million citizens (89 percent of the vote) voted for independence of Venetian Republic.

The instant-book presents an interview with Gianluca Busato, president of Plebiscito.eu and organizer of that referendum, which explains the secret story of those days, the plans for independence that have arisen and future scenarios, from the “New Silk roads” to Cyber-Freedom and crypto-currencies. In the eBook has been published also an interview with Prof. Aleksandar Savanovic, Associate Professor at the Faculty of Political Sciences of the University of Banja Luka (Bosnia and Herzegovina) e Advisor to the Speaker of the House of Peoples Parliamentary Assembly of Bosnia and Herzegovina, which has conducting an extensive research on Veneto’s independence movement with a particular focus on 2014’s plebiscite.

The eBook also publishes the Final Report of the Commission of International Observers that certified the results of referendum.

During the presentation of “Una X per il Veneto” there will be also a public debate on “Catalonia, Veneto, Independence, Autonomy” with the presence of the authors Riccardo Rudelli, Paola Bonesu, Roberto Errichelli and of with Gianluca Busato and Simonetta Rubinato, senator for the Democratic Party in the Italian Parliament in Rome, which is one of the main supporters of 22nd October’s referendum on autonomy.

The President of the Veneto region, Luca Zaia, acted in April after the Constitutional Court of Italy authorised referenda, but only on greater autonomy for the region.
The question to be asked on October 22 is: “Do you want the Region of Veneto to be granted further and special forms and conditions of autonomy?” On the face of it, the answer will be an overwhelming Yes.

Busato wants to go much further, however. He said: “On October 22, they want you to vote for the utopia of autonomy in Veneto, an illusion that you will be granted by the Italian parliament. Every other day you can actively activate for the full independence of Veneto. This is only greater powers promised if people abandon independence”.

Plebiscito.eu recently also presented the first preview of its Crypto-State, a brand-new form of digital platform to support the creation of independent Veneto.

Gianluca Busato commented: “we take on this new challenge on the technological innovation soil, that is to say the field where even the most advanced legal/economic subjects and social deep changes can take their own shape”.