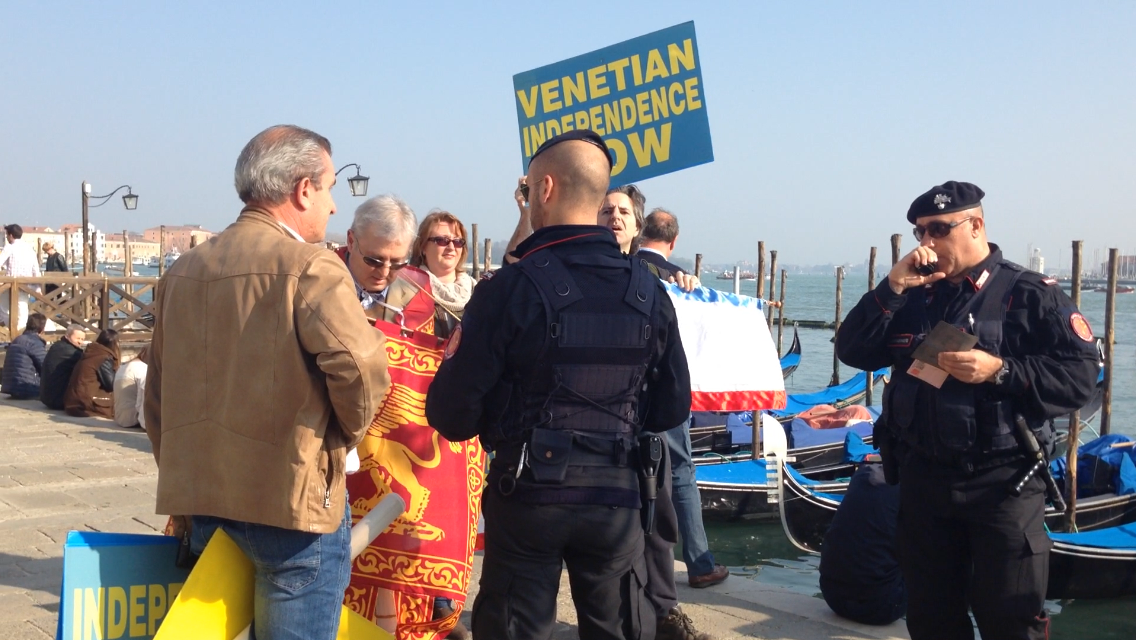 Washington, DC – On March 14 Russian reporters Alla Demidova and Olga Kameneva flew from Moscow to Venice with an entire NTV troupe to film a reportage on the referendum of independence of Veneto to be held on March 16. The most adequate place to interview supporters of the rebirth of the Venetian Republic had to be in front of the Dogal Palace, where for centuries prominent Venetian families met to rule over their maritime empire. While interviewer and interviewees were surrounded by curious tourists and their flashing cameras, the surreal happened.

The Italian military police, a.k.a. Carabinieri, arrived escorted by 25 army soldiers wearing bullet proof vests. They ordered the Russian cameraman, as well as his Venetian colleague from local TV station Antenna Tre, to immediately stop filming, and took down the Venetian flags that two referendum organizers were carrying. “It is severely forbidden to wave St. Mark’s flag in St. Mark’s square!” yelled the Carabinieri commander (he refused to provide his name). He then proceeded by requesting documents for identification and questioning of Gianluca Busato, president of venetosi.org, the committee for the Yes vote, Orazio Scomazzon and Raffaele Serafini, coordinators of venetosi.org for Vicenza’s province.

The carabiniere then requested documents from the Antenna Tre journalists and the Russian NTV troupe. He refused the Russian passports as not valid in Italy because they were written in Cyrillic and pretended to see valid documents. He later accepted them once it was pointed out to him that they also had an English version, and accepted Serafini’s translation of the Russian passports from English to Venetian. He finally demanded identification to two Japanese citizens who were filming the whole scene while in line for their gondola ride.

Serafini, Scomazzon and Busato were then brought in to the Carabinieri station for further questioning. Once released they were met by detective Zago of the Italian police in Venice, who was investigating why the military police was interfering with civilians and journalists. Zago confirmed that Italian law forbids waving St. Mark’s flag in St. Mark’s square, but he added that technically the area between the Dogal Palace and the gondola’s station, where the arrest happened, is not considered part of the square, which is only in front of St. Mark’s basilica around the corner Everywhere else in the city people can display the flag of their patron saint without fearing military intimidation.

While this lost in translation incident happened in Venice, in nearby Treviso the mainframe of plebiscito.eu, the bipartisan committee in charge of the referendum procedures, received a massive hacker attack. “We have in our database the vital records of all 3.8 million adult Venetian citizens and their voting codes, and without it we would not be able to verify the validity and uniqueness of each vote” explains Alessandro Giacomella, Chief IT Officer of plebiscito.eu “the attack (a combination of DDOS and other brute-force attempts to unlock our systems) arrived from French IP, but we managed to neutralize that in a minute”