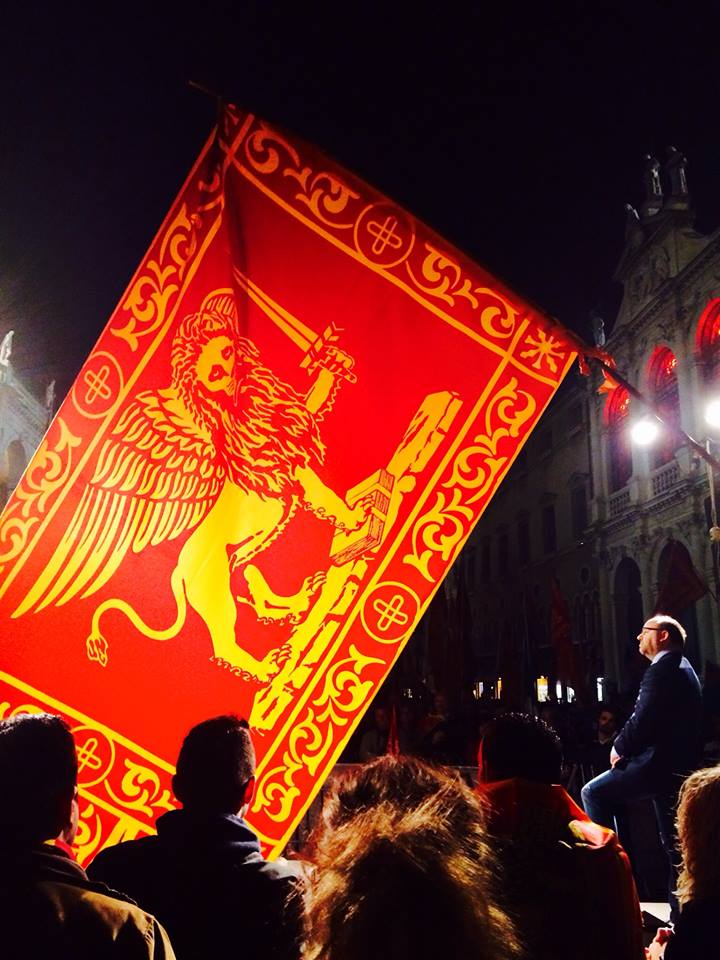 Gianluca Busato: “after the Venetian independence referendum, we will manage one more referendum also in Lombardy. Independence cannot be a process with many hiccups, only who that was able to bring the Venetian question all around the world can get it”

[Venice, July 21] – Yesterday in Padua at the Hotel Crowne Plaza was celebrated the first federal convention of VENETO YES (“VENETO SI” in Venetian Language), the new political movement created to support Plebiscito.eu, the organization that arranged the Venetian independence referendum on 16-21 March 2014.

The Convention, that was opened with greetings by Rinaximento Veneto, Alex Storti, director of “Diritto di Voto” and Paolo Bernardini, member of the Delegation of Ten, ratified then the debut of the new political grouping that will run for elections of the Venetian Republic and also eventually for 2015 regional elections (if the latter will be held), with a coalition to support a candidate to the presidency favorable to independence.
After initial guests’ greetings, Gianluca Busato, secretary and founder of VENETO YES, asked and obtained with unanimous vote of the conference the appointment of the National Council, composed by areas coordinators and functional supervisors of Plebiscito.eu, who will time until 31st August to accept the new charge.

Later on some thematic reports followed, among them the speech of Mr Franco Correzzola, a lawyer, about Peoples self-determination right, in particular starting from the 14 points statement by US President Woodrow Wilson in 1917 and mentioning experiences of self-determination referendum of South Carinthia in 1920, the Korean question and more recent example of Kosovo.

After that Gianfranco Favaro, member of the Delegation of Ten, indicated the example of Switzerland as a reference model also for the Venetian Republic, in particular for the use of tools of direct democracy, as well as Luca Schenato illustrated (he is the author of “Il Veneto è chi il Veneto fa”=”Veneto is who that Veneto makes”), as a direct witness of how the Swiss Confederation works, since he has been living there for three years by now.

In following speech by Alberto Marsotto was presented the campaign of fiscal objection, that for the first time Plebiscito.eu scaled up, bringing to date more than 8,000 companies to join to the total fiscal exemption declared on 25 March 2014 by the Delegation of Ten.

In his introductory speech to the Convention, Gianluca Busato therefore reminded words by Mr Matteo Renzi in his interview to CorSera on 13 July when the Italian Premier stated: “Italy is much stronger than it is described in international context: it has a high public debt, that’s true. But it has private wealth and if it neatens up finally Internal Revenue Service, bureaucracy and justice it can make it.”
“That is to say – commented Busato – that all that makes a state must be fixed! Practically after 150 years (148 for us Venetians) the “project Italy” has failed. Also the Venetian people (although at the beginning forcedly annexed) has proudly joined for many years to this project, bringing its peculiarities and capacities, but it is time to acknowledge that it is a bankrupt project that is leading to ruin also and above all Venetians. It is time therefore for a new project: The Venetian Republic”.

“The Venetian Republic project, fully independent and sovereign – then followed Busato – can be brought forward rapidly, factually and with confidence only and exclusively by whom already drew entire world’s attention to the Venetian question, as never happened before, following a pacific and democratic plan and to lift it out of the outlandish ethnic ghetto. On the other hand who follows the path towards the Venetian independence with too many hiccups, does not deserve the confidence of people that demand the Venetian Republic: you cannot be on Mondays Italian obscurantist nationalist in Brussels, on Tuesdays for more than twenty years going fruitlessly to Rome to sleep and to steal our money and our hope, on Wednesdays in Venice pretending to be half autonomist (together with politicians of the Regional Committee bribed in the MOSE affair) and on Thursdays declaring himself a champion of the Italian tricolor Center-right Coalition,”.

VENETO YES aims to become in a few months the first civic organized grouping in Veneto, thanks to direct engagement and activation of more than two millions Venetian people that voted the Veneto independence referendum.

“Our objective – says Busato – is to activate in the territory 50,000 Venetians in just three months, thanks to telemarketing and other ways of networking. We have a wonderful asset that no other movement ever had: we know in detail our electoral constituency. Our birth as a digital platform will allow us an amazing growth. We are the only force that knows its electors. And we will contact them individually, with a coordinated action that will change radically the balance of power”.

“Moreover we will bring the struggle into enemies field, just symbolically at the moment, but with the intent to make it shortly part of a well defined operative strategy. The Venetian Republic will be completely independent sooner and more easily if we will be able to support our Lombard friends, in turn, to get out from under a failed state. They have many reasons to do that for sure. And thanks to us Venetians they have also a clear example to follow up. For that we will help them to arrange as soon as possible the digital referendum for the independence of Lombardy”.

Also some international matters have been mentioned, on the eve of independence referendums in Scotland and Catalonia. Regarding some statements ascribed to Mrs Angela Merkel; in her opinion, though internal right to discussion must be respected, the main point should be the territorial entirety of states; Gianluca Busato reminded that precisely the German chancellor had been living for 35 of her 60 years in a German state that had borders different from the actual ones: “Venetians were close and supportive to East Germans when practicing self-determination they crushed the Berlin wall, nowadays Europeans be all supportive with us Venetians while we are crushing the wall of the fiscal oppression, to defend our human rights extensively trampled on by the Italian state. The representation of the dream of a free world yesterday was celebrated in Berlin, today is drawn in Venice”.